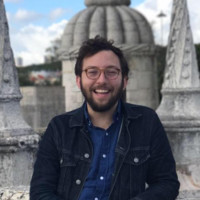 I’m the editor of the Forbes CMO Network and also a staff writer at Forbes covering marketing, advertising and technology.

Previously, I was a staff writer at Adweek where I covered the present and future of emerging technologies including virtual reality, augmented reality, and blockchain. I also wrote about agencies, brands, and the growing intersection of Silicon Valley and Washington D.C. including what it means for legislation and regulation of various parts of the tech and advertising industries.

Prior to moving to New York, I was a political reporter for the Associated Press in Alabama, where I wrote about state government and other regional stories such as the removal of Confederate flags and the legalization of same-sex marriage.

https://twitter.com/martyswant/
This creator is unclaimed
When you claim a creator page on The Juice, it will be evaluated by our moderators prior to unlocking it.
Claim this creator
1
video
Preview of The Juice
Sign up to see what's popular with other marketing/sales pros like you. Stay in-the-know and stay anonymous. All content has been un-gated for you.
Sign up
Share this
Share to:
- or -
Copy the URL below and share to your favorite social platforms.
A quick note
This link will direct the reader to the details page on The Juice. They will need to sign in or create a free account to engage with content.